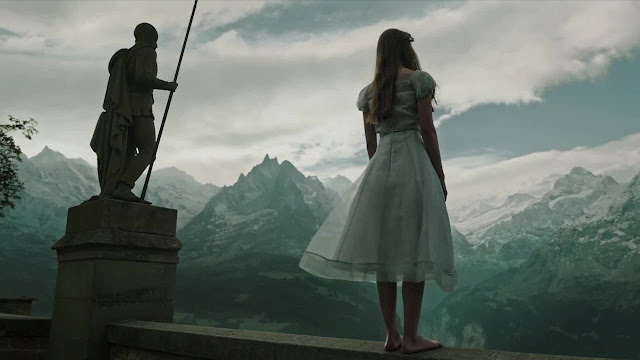 "Let there be no difference made among you between any one thing & any other thing; for thereby there cometh hurt." AL, I:22 (Alister Kroli)

"If the body of the King dissolve, he shall remain in pure ecstasy for ever." AL, II:21

"The one who sees me says goodbye to his life. You have seen the glorious Valkyrie’s look, thus you should go with her now". (Gerard van der Leeuw)

Interpreting Mazdaian cosmogony, Henry Corbin states fravarti (or fravachi) as sky archetypes of all beings which encompass light creation. I am saying light creation in order to make a difference between what Ormuzd, that is, Ahura Mazda, created, and Ahriman’s deeds, Ormuzd’s dark divine rival which is like Tolkien's Sauron. In accordion with Mazdaistic teaching of ancient Iran, every being has a fravarti, which, before all, has the role of a titular angel. Therefore, every human being has its celestial counterpart in the form of fravachi. And what is interesting- fravachi are female. Except for the houris in Islam, to an extent, the Iranian idea of fravarti has a parallel in Nordic valkyries, that are celestial companions of the fallen warriors in Odin’s hall Valhalla, but also those that are taking them there after their death. Valkyries are in that sense, in accordion with Nordic tradition, a special form of fravarti-angels of those warriors who will accompany Odin in a metaphysical war against the forces of darkness. Fravarti and valkyries keep and bear the power and destiny of a man. While paraphrasing Van Der Leeuw on the image of Brunhilda, Henry Corbin wrote that Richard Wagner created a beautiful and moving figure of an angel:

"Wotan’s thought, a soul sent forth by God, she is certainly the authentic Fulgja, holding his power and faith in her hand, her apparition always signifying the imminence of the beyond". (Henry Corbin, The Man of Light in Iranian Sufism)

The picture of Wotan’s though is, in its essence, fitting in basically Mazdaistic image of Iranian Sufi mystic Nasiruddin Tusi, which Corbin states:

Apart from beings materialized on Earth, angels, archangels, even Ahura Mazda himself, have fravachi. That idea resembles Jahveh’s Shekhinah or Shiva’s Shakti. Fravartis are, therefore, entities of purely spiritual nature (which does not mean they cannot materialize in a way), in charge of every being (without considering what these beings are). They represent the archetypal image of every being. The similarity between fravachi and the idea of an angel guardian is obvious, and the idea has its role even today in some Western occult branches. A man detached from his angel only sees Ahrimanic shadow which is himself. "Having lost the meaning of an angel", says Henry Corbin, "a man without Fravarti cannot imagine it anymore but as a caricature". As a man sees his angel, so his angel sees him. In that way, the angel is witnessing a man. An angel is a witness. Corbin says that Shahid is in a mystical sense a being whose beauty witnesses the divine beauty, thus being a divine prophesy, that is, Theophania, and explains:

If we do not see an angel, we will not see God just as God that is looking at us through our personal angel will not see us. For God to see us as worthy, that is, as light beings, it is necessary for us to be like a mirror reflecting God’s image when God is reflecting back to us through our angel’s eyes. After the vision of lusty or terrifying pictures originating from a shadow, seeing fantasmic light phenomena is prior to the vision of an angel. A mystic who perceives light phenomena, the so-called photisms, in his inner vision, is on a good way to see his angel, his fravarti, by clearing the rest of the darkness. The darkness coming from the personal shadow simply blocks the vision of the inner genius. The origin of the darkness is, to say, of libidinous nature, since it is about the powerful aspect of shadow coming from sexual sphere in the form of qliphotic apsara, the houris (fantasmic whores, Urvashi, Kurvashi), sexual dreams, reveries, voluptuous images, etc, that is, a negative aspect of fravarti. The appearance of light in meditation indicates the presence of fravarti and that a contact has been made. Following the thread of origin of the mystic light, we come to the idea of the metaphysical east whose macrocosmic symbol is physical north:

"Where the shadow which holds the light captive ends, there the beyond begins, and the very same mystery is enciphered in the symbol of the North. In the same way the Hiperboreans symbolize men whose soul has reached such completeness and harmony that it is devoid of negativity and shadow; it neither of the east nor of the west… the people of the northern sun who have fully and ideally individualized features; a people composed of twins linked together, typifying a state of completeness expressed also by the form and the dimension of their country: an earthly paradise in the Far North whose shape, like the war of Yima, like the emerald cities Yabalqa and Jabarsa, like the Heavenly Jerusalem, is a perfect square". (Henry Corbin, The Man of Light in Iranian Sufism) 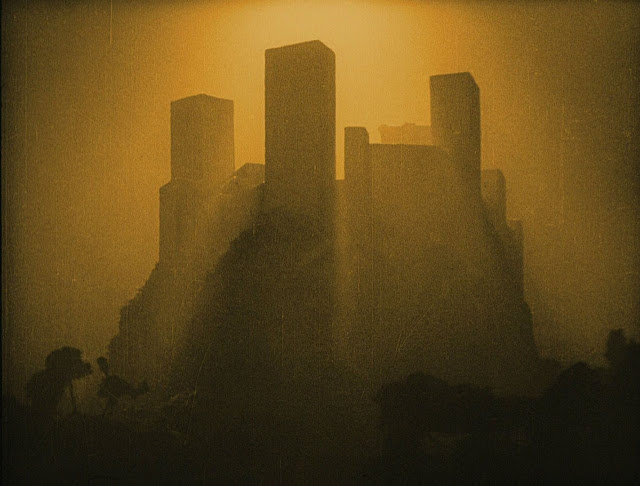 That mystic land is Eran-Vej, or Airyanem Vaeja, a mythical homeland of Aryans, that is, Iranians in the far north. Coming to oneself, discovering one’s true essence, one’s angel, inner genius, is equal to discovering this mythical and basically metaphysical homeland, spiritual kingdom of beings in subtle bodies (remember the celebrated body of the eternal life which is gifted by Osiris), White City of gods, The City of the Pyramids, etc, depending on tradition (see: On the holy city and kingdom). In order to be able for that metaphysical return home, it is first necessary to awaken and develop our inner light, our true and perfect man of light inside of what is usually called a human being.

"To long for Eran-Vej is to long for the Earth of visions in medio mundi; it is to reach the center, the heavenly Earth, where the meeting takes place with the Holy Immortals, the divine heptad of Orhmazd and his archangels. The mountain of visions is the psycho-cosmic mountain, the cosmic mountain seen as homologous to the human microcosm. It is the “Mountain of dawns” from whose summit the Chinvat Bridge springs forth to span the message to the beyond, at the very spot where the auroral meeting of the angel Daena and her earthly ego takes place. Here, therefore, the Archangel Vohu-Manah enjoins the visionary propeth to cast off his robe, that is, his material body and organs of sensory perception, because in Eran-Vej it is the subtle body oflight that is the seat and organ of events. And it is there in medio mundi and at the summit of the soul, that the Zarathustrian seed of light is preserved, which is the Xvarnah of the Saoshyants, the future Saviors who by a cosmic liturgical act will bring about the transfiguration of the world". (Henry Corbin, The Man of Light in Iranian Sufism)

The microcosmic form of that mystic north, that is, east, is a heart. It is in the heart where angel and men meet. In Islam, it is the mystic mountain Qaf whose summit is composed of emerald rock (of which Hermes Trismegistos’ EmeraldRock is chiseled) – which casts its reflection over the whole of the mountain, just as an enlightened heart, and as the Sun does, lights and enlightens the microcosm. Remember the Apocalypse description:

"And behold, a throne was set in the heaven; and one sat on the throne; and he that sat was to look upon like a jasper; and a sardine stone; and there was a rainbow round about the throne; in sight like unto an emerald." (Revelation 4:3)

On the diagram of the Kabbalistic Tree of Life, Samekh path leads to the lunar sefirot Yesod towards the solar Tiphereth. Samekh is a column which, from the lunar base, from shadow, from night’s darkness, leads the initiate to the land of beauty and light to an angel (in that sense, it is necessary to pay attention to the symbolism of the tarot card Moon XVII). It is the mystic land, or middle Orient, as Corbin would say, where microcosmic lesser Orient (the soul reaching the peak of its yearning and consciousness) and macrocosmic greater Orient, great Orient of pure intelligence, meet. The expression of great Orient is precisely the Emerald Rock on the top of the mystic psycho-cosmic mountain. The following Corbin’s description (although it was not his allusion, the similarity cannot be denied) clearly indicates the symbolism of the aforementioned card Moon XVII, in the context of esoteric night travel on the top of the mystic mountain:

"The midnight sun bursts into the flame at the approach to the summitthe primordial image of inner light that figured so prominently in the ritual of the mystery religions, the light carried by Hermes into the heart of the underground chamber… When the pillar of dawn bursts forth, that is to say, when the being of light broke down the walls of the temple that enclosed him (here we are reminded of the columna Gloriae of Manicheism in which renascent of the elements of light coincides with the descent of the Cross of Light), Hermes saw an Earth being swallowed up and with it the cities of oppressors drowning the divine wrath." (Henry Corbin, The Man of Light in Iranian Sufism)

It is about the destruction of the material, a sensual world in the mind of the initiate which is depicted by the symbolism of the Major Arcana card Tower XVI, which also depicts the doctrine of metaphysical West as the place of exile and fall into the material. The Enlightenment comes with the first rays of the sun, as in Tarot the card Sun XIX comes right after the card XVII Moon (allusion on the Egyptian Book of the Dead, Coming Forth by Day). The metaphysical sun which enlightens the enlightened is the divine Eye watching, at the same time being the eye of the initiate watching the beyond. The seven traditional celestial hierarchies, seven levels of the enlightenment, seven levels of initiation are the seven divine eyes, levels of consciousness and perception. Their common name is the eighth eye, the eighth world, where even the form of the number Eight indicates immortality and its power of focus on the spot, as well as the power of the initiate to observe the eternity through the focus spot. In that sense, the Angel Guardian should be perceived as a guide and the initiator who leads the initiate into the Great Orient. Northern Star, as qibla, as the focal spot of the metaphysical East, as the visible aspect of greater Orient, is the symbol of fantasmic orientation of an adept, as the place where his angel guardian resides in microcosm. It is the place around which the whole Universe revolves. There resides the Angel Guardian of the whole Universe, as well as the angel guardians of all beings. The daughters of an invisible sun lead us there.